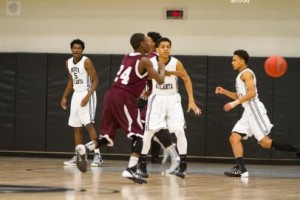 Coming into the 7-AAAAA boys basketball region tournament the NAHS Warriors needed to win two games to make the GHSA state tournament and thats exactly what they did. On Wednesday they beat Dalton HS the 6th ranked 5-A team in the state in convincing fashion by a score of 58-48. The final score was not a true indication of how well the Warriors played, having leads of up to 24 points before the coach cleared the bench giving everyone playing time. Lead by Ronald Bell’s high flying dunks, Donavan Ham slashing drives to the bucket, Ethan Staes 3-point bombs and Dennis Pegues running the point. All nine seniors played a big role in the Warriors advancing in the tournament. The Warriors play again on Friday at 5:30 against Riverwood HS at Creekview HS in Canton.