The Running Warriors’ full frontal assault on the school record book that started four years ago when the girls finished 20th at State, continued unabated Saturday.  The Warriors traveled to Rome, GA for the Darlington Cross Country Festival and ran into the history books.  First, the girls got it rolling with the fourth best total team time in school history (1:49:52) which was good for seventh place out of 21 teams.  Sophomore Ellie Hankin led the Warriors with a ninth place finish.  Her 20:21 was not only a PR, but the fifth best performance in NAHS history.  This landed her as the third best performer in history behind Madeline Pearce (20:05) and Glenda Tutt (20:20).  Super Sophs Sarah Hetzel (38th), Kate Breeden (42nd), and Sara Pearl (50th) combined with freshman Aubrey Miller (52nd) to round out the scoring. 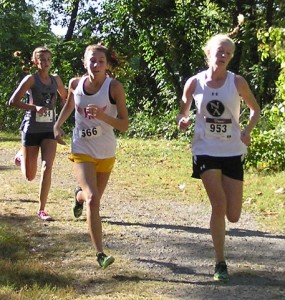 Then it was the boys turn.  Senior Jackson Pearce took over in the last mile to win the race in a PR 16:16.  His time surpasses Harvard track star Malik Epps (’12) as the third best performer in North history behind the Arega brothers.  His time was the seventh best performance in NAHS history.  North placed four runners in the top 15 to break the team time school record they had just broken last weekend.  Senior Matthew Self (12th), as well as sophomores Matthew Aspinwall (13th – breaking his own recently minted sophomore class record by nine seconds), and Mac Bloodworth (15th) all got PRs.  Freshman Alden Sweatman (59th) rounded out the scoring to give the Warriors 100 points, good for second out of 30 teams.  This second place finish ties the Warriors’ best invitational finish in school history.  NAHS was only 17 points behind the winner, 7A power Kennesaw Mountain, and fifteen points ahead of third place 7A Norcross. 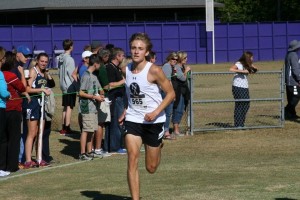 Jackson Pearce nears the finish for his second invitational win of the season. His 5K time of 16:16 met the  MileSplit US Second Team performance standard.

In the girls’ JV race junior Murphy Rief (11th), sophomore Abbie Armentraut (18th), and freshman Larkin Rief (20th) all got medals for a top-twenty finish.  The JV girls placed fifth, only three points out of third. 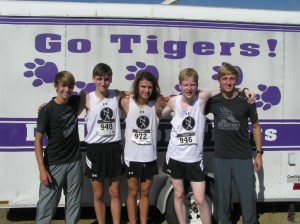