Mac Bloodworth (1537) and Matthew Aspinwall show their exhaustion at the end of the boys 6A Region 7 race in Grant Park on Oct. 26th. (Photo: Ed Pearce)

Five of the girls cross country runners got course bests on the newly revised Grant Park course Oct. 26th at the 6A Region 7 meet.  Yet it was still not enough to get to State in what was the toughest girls region in any classification.  The region contained last year’s 6A (Northview) and 5A (Dunwoody) State Champions.  The girls went into the meet ranked 17th in the state.  However, as a testimony to the brutal strength of the region, they finished seventh out of nine teams.  Sophomore Ellie Hankin led the way for the girls as she moved up in the last half of the race from sixth to finish fourth and qualify for State.  Her time of 20:54 is the eleventh best performance in NAHS history and betters her own school record for the course.  Kate Breeden, Rebekah Hetzel, Aubrey Miller and Sarah Hetzel rounded out the scoring for NAHS.  Junior Jennifer Lusk picked up a course best as sixth runner.

The boys finished with 129 points in fifth place, only 8 points out of fourth and a State qualifying spot.  This is also the toughest 6A boys region, as the Warriors went into the meet ranked 12th in the State, but fifth in the region.  Senior Jackson Pearce took control of the race just before the two mile mark (10:53) and extended his lead to over 50 meters at the finish, clocking 16:53 for the third fastest time ever for the course.  His win earned him a trip to the State Meet.  Sophomores Mac Bloodworth (CB) and Matthew Aspinwall (CB), combined with freshman Alden Sweatman (CB) and senior Matthew Self to round out the Warrior scoring.

The Running Warriors (both track and cross country) continue to consistently year in and year out get athletes to the State Meet level.  Pearce and Hankin will run Sat. Nov. 5th at Carrollton High School in the State Meet at 11:00 and 11:45 AM, respectively. 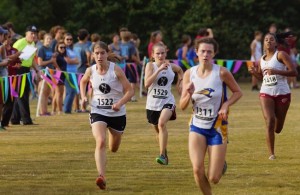 Rebekah Hetzel (1522) and Aubrey Miller (1529) “drive it home” against Priscilla Smith (1311) of Chattahoochee and Sarika Gowda (1418) of Johns Creek on a revised and faster Grant Park Course at the 6A Region 7 meet on Wed.  Note long time NAHS fan and alumni Hawthorne Wesley (behind clipboard with optic yellow shirt and Running Warrior hat), cheering on the Warriors! (Photo: Ed Pearce) 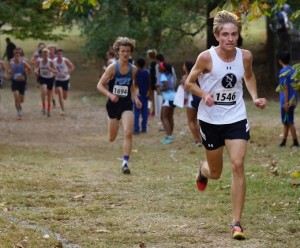 Jackson Pearce widens his lead over Pope senior Pieter DuToit (1694) with 1300 meters to go.  Pearce used the “home” course to his advantage, winning by ten seconds over DuToit.  He is undefeated at Grant Park over the last three years. (Photo: Ed Pearce)