Senior cross country Captain Jackson Pearce atop the podium at the Georgia State Meet in Carrollton on Nov. 5th.

Senior Jackson Pearce capped off a cross country career that saw him score at two previous State Meets.  However, the third time was a charm as he became only the third Warrior in history (boy or girl) to make a podium finish (top 10) at the State 6A Meet in Carrollton on Nov. 5th.  Pearce held his position steady between 6th and 8th place through two and a half miles of the tough 5K (3.107 miles) course.  Then he dropped back several places.  However, he rallied in the last 250 meters and picked off several runners earning him an eighth place finish.  This culminates a season that saw Pearce win one road race and four major championship meets (Greyhound Invitational, Darlington XC Festival, APS Champs, and the 6A Region 7 Meet).  He is one of the most prolific athletes in North history, having won one regional and three consecutive APS cross country titles, and multiple APS and regional track titles.  He is a multiple time state meet scorer in both cross country and track.

Sophomore Ellie Hankin, running in only the fifth major 5K of her life, finished 34th by clocking the 23rd best performance in NAHS history.  Her performance made her the second highest finishing girl at the State Meet in Warrior history. 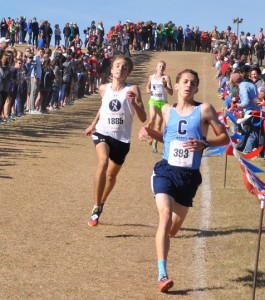 70 meters from the finish Jackson Pearce (1885) prepares to take down regional foe Zachary Morgan (393) of Cambridge after already passing  regional foe Michael Smith (2002) of Northview at the State Cross Country Meet in Carrollton on Nov. 5th. He was undefeated by regional opponents this season.  (Photo: Serena Miller) 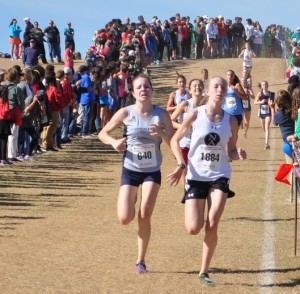 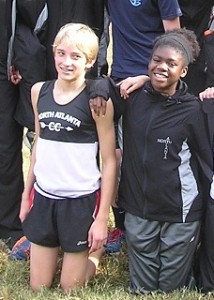 Jackson Pearce after the 2012 Regional Cross Country Meet at Druid Hills Middle School where he ran 19:38 in for 13th place in the JV race.  He is pictured with Glenda Tutt (’16) who is now competing for Oglethorpe.  Pearce was the first Sutton athlete to ever come North and compete at the JV level for the Warriors in any sport as he ran both cross country and track and field as a Sutton 8th grader.